As most of you probably know, I got married last month! The wedding was in Claremont and went great, and it's probably worth a post of its own; however, what I've come to write for you is a description of what followed — our honeymoon in France. We visited Paris, Beaune (in Burgundy), Avignon (in the Southern Rhône Valley), and Saint-Raphaël (in Côte d'Azur). Read on for more pictures and anecdotes than you could've ever asked for!

(Unless otherwise noted, all photos taken by me with my E-M5 and the Olympus 12-40 PRO lens, or my iPhone 6. All of the photos here are on Flickr)

We got married on Sunday, May 31st in Claremont, CA. We flew out from LAX on Tuesday (June 2) morning at 7:00am, which gave us a little bit of time to unwind before traveling. I highly recommend this. We arrived in Paris (well, at Charles de Gaulle) at 7:00am the next day. This 15-hour flight was supposed to be serviced by British Airways, but they switched us to an American Airways flight at the last moment. I… do not recommend American Airways for a long flight. 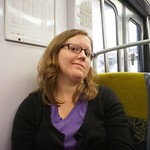 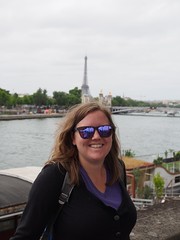 In Paris, we stayed at the lovely Hotel Le Six in the 6th Arrondissement. Last time I was in Paris, I stayed on Avenue des Champs-Elysées in the 8th, and I enjoyed the 6th a lot more; it felt more like a place where people actually live and a little bit less like a giant tourist trap. The hotel was gorgeous (although, uh, also a bit pricey).

We took the Metro everywhere. It puts American public transit to shame. Here you can see Eva looking Super-Pumped™ about being awake at 7am after a super-long plane ride.

We did a lot of touristy things while we were there. Here were some of our favorites:

I am quite enamored with Impressionist-period art (there's a big Pissarro print in our apartment), and I think that the Louvre is far too large to visit on a short trip to Paris, so we spent a good part of one of our days in Paris at the Musée d'Orsay. That was the first day we were there, so we were super-tired, but it's a great collection — even better than the Barnes in Philadelphia.

Here's a selfie of us looking exhausted in line outside: 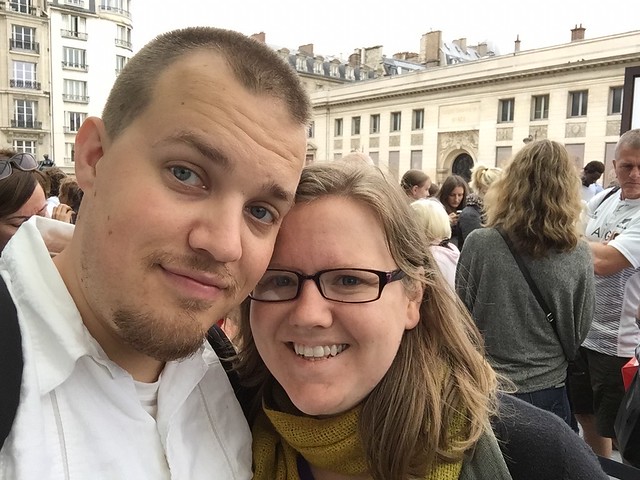 Walked up to the top of Sacre Coeur in Montmartre

Montmartre is like a little (super-touristy) village right in Paris. Sacre Coeur is a big church which you can walk up for a great view of the city. Bonus advantage: it's a somewhat strenuous walk (both up to Montmartre, and then another 300 steps to the top of the church), so there are very few tourists. I think we saw four other people at the top?

Went to the Bastille

Eva is really into prisons (not sure if you knew that), so we went and hunted down the largest remaining piece of the Bastille (which is in some little park maybe half a kilometer from la Place de la Bastille). Eva sat on a small bit of stone and concrete which didn't have a large piece of fence next to it and which theoretically was part of the Bastille, although for all I know it could've been a sewer cover with a plaque next to it. 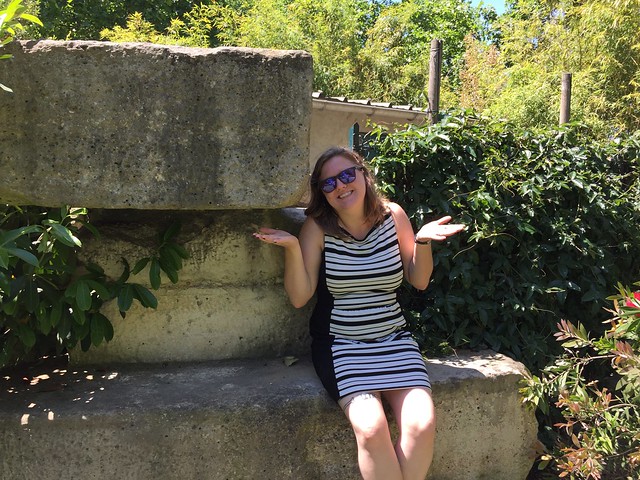 We also actually went to Place de la Bastille and looked at the monument and went shopping at a little flea/farmers market.

Went near the Eiffel Tower

Neither of us was interested in standing in line for a few hours to actually go inside the Eiffel Tower, but we walked around the base and sat in one of the parks for a little while. 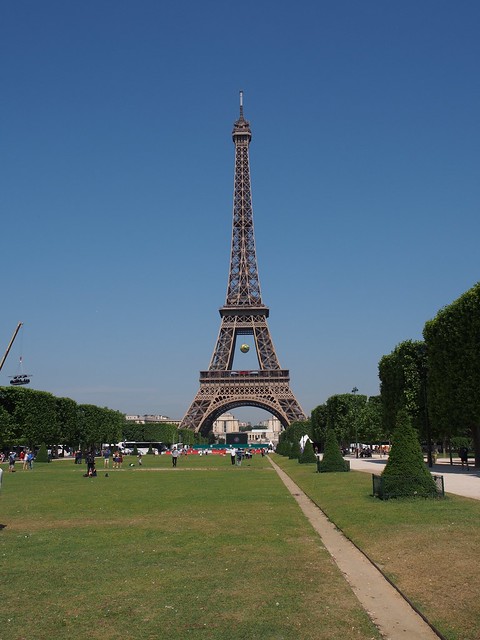 There's a neat art museum in the 6th called Musée du Luxembourg. It has a gorgeous property. 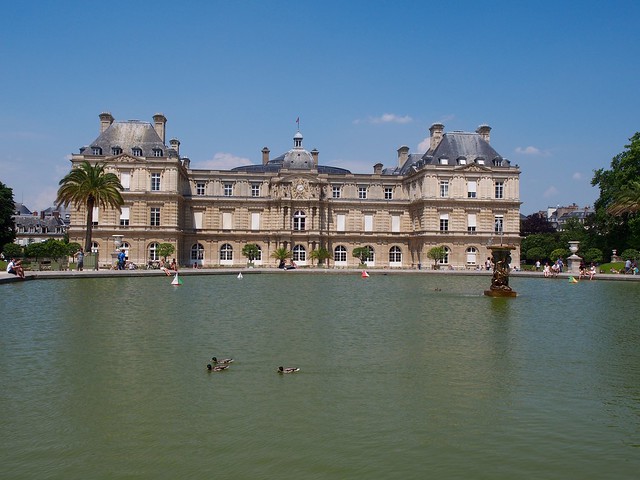 There were also kids racing sailboats, which was adorable. 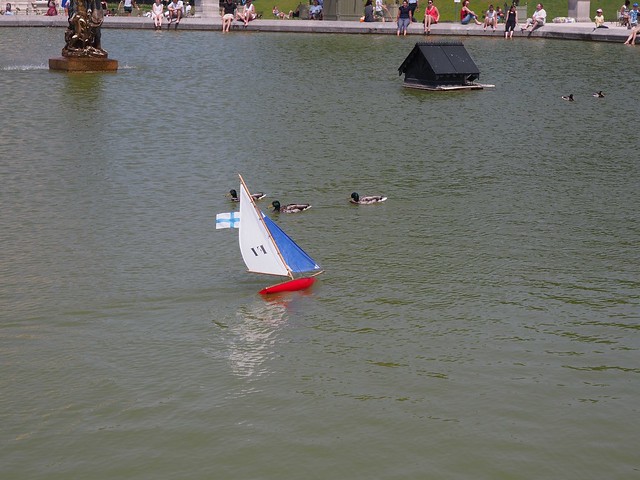 We left Paris on Saturday morning and took TER to Beaune, a gorgeous town in Burgundy. Here's Eva standing in front of the Hôtel-Dieu in Beaune: 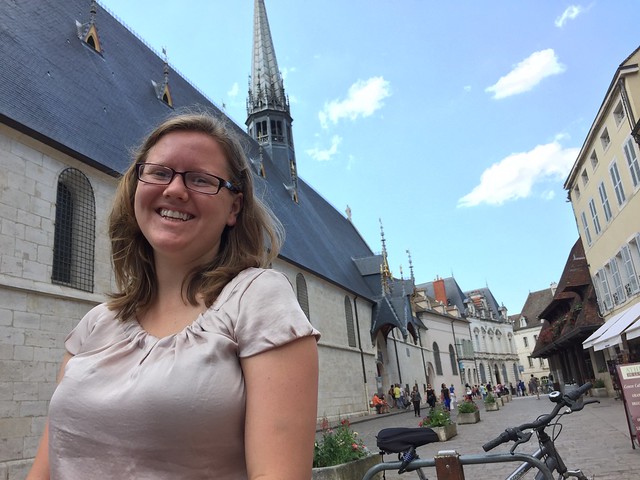 Just a brief aside: France has several long-distance train systems. The one we used for almost all of our travel was TER, the regional/commuter line. It went to every place we wanted to go and, yes, while it wasn't a "bullet train", TER trains still get where they're going pretty quickly (about 140kph / 85 mph, or faster than almost every Amtrak train), and we found them quite comfortable.

Anyhow, Beaune. Beaune was absolutely gorgeous. We stayed at a B&B called La Terre d'Or in "La Liserons". I don't think I could recommend a place to stay more highly — the grounds were gorgeous, the people were amazing (we interacted mostly with Pierre-Jean, Jean Louis, and Vincent, and they were all great), the food was delicious, the wine was unbelievably good, it was all just perfect.

We decided on Sunday to go for a bike ride and visit some of the surrounding towns; unfortunately, it quickly rose to about 35°C (about 95°F) and we abandoned that plan just after reaching Bouze-les-Beaune, running out of water, and generally being miserable. However, the ride there exhibited gorgeous countryside. 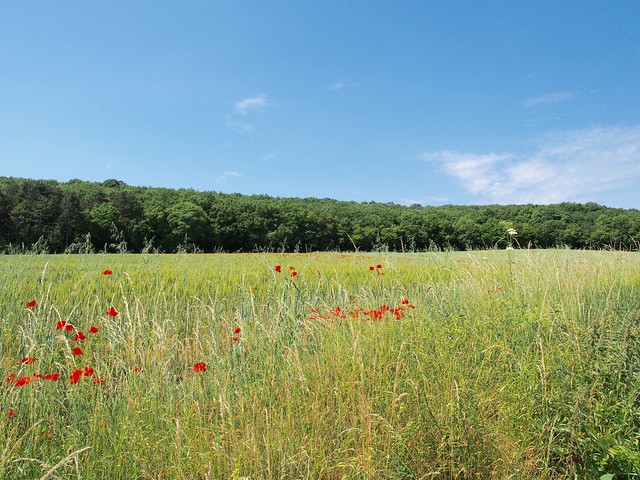 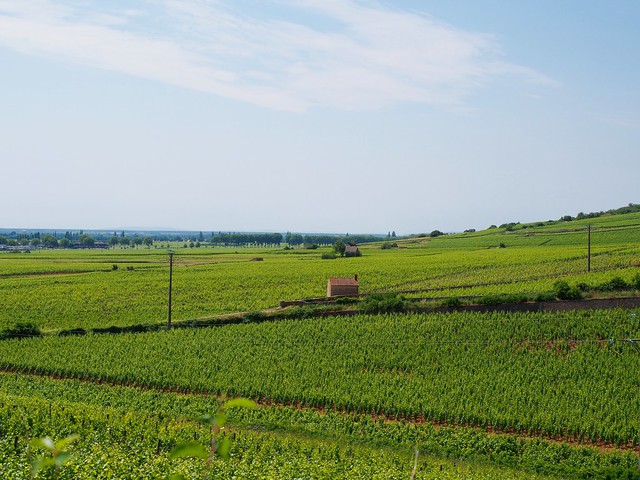 We rode back down the hill to Beaune itself and did some shopping in the roughly 10% of stores that were open on a Sunday.

Monday, though, Monday was the day. We went out with Pierre-Jean (one of the proprietors from La Terre d'Or) and he gave us a crash course in Burgundy wine. Some points to be aware of if you're as ignorant as we were:

Like all good wine, it's all about the soil. Look at those rocks. 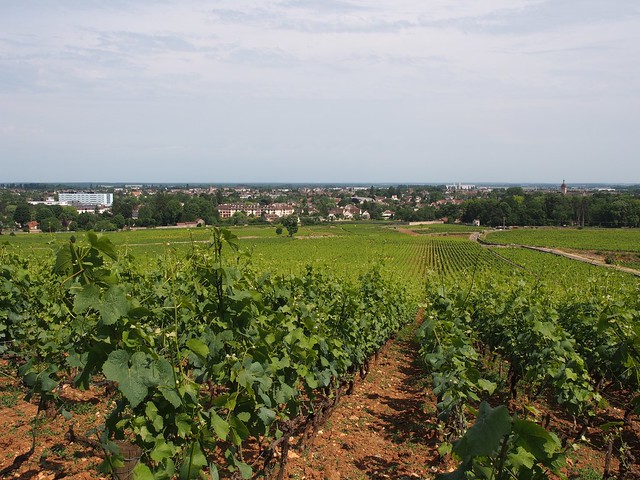 Pierre-Jean took us all around Cote de Beaune and to a bunch of great wineries:

This little cave is in either Orches or Baubigny or maybe Saint-Romain (I didn't get a GPS fix and the Internet isn't sure which town we were in). Apparently, Fanny is an 18th-generation Burgundian vitner (which seems… hard to verify?). The surrounding countryside was beautiful, and the wine was great. Eva liked the Rosé (and, in fact, she liked all of the Burgundy Rosé because it was dry instead of being super-sweet like most American Rosés), but I thought the Auxey-Duresses Village AOC really stole the show. 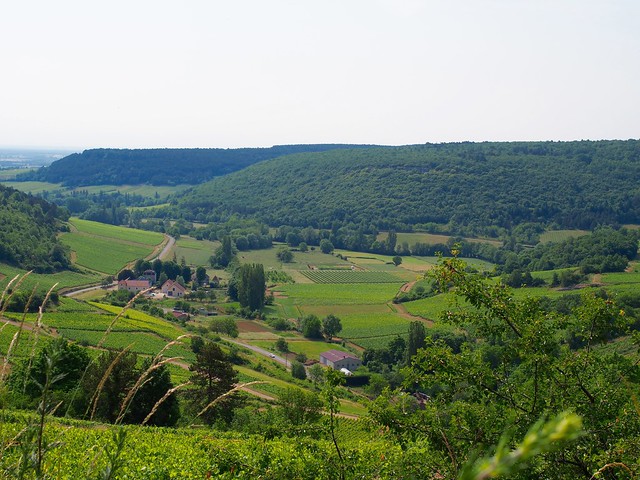 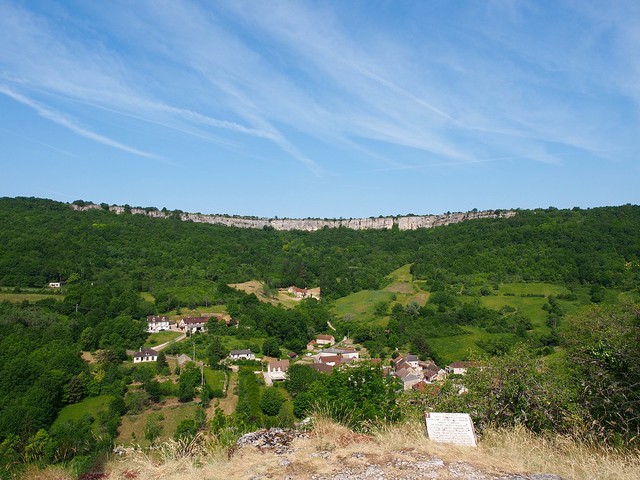 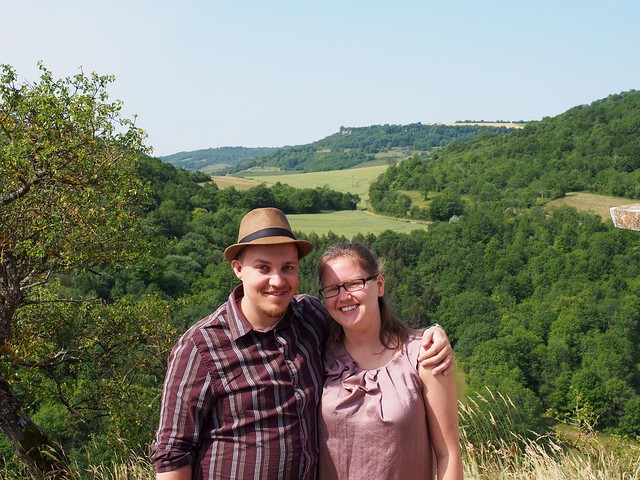 This was a cool castle in, uh, Santenay. We toured the facility and tasted wines. 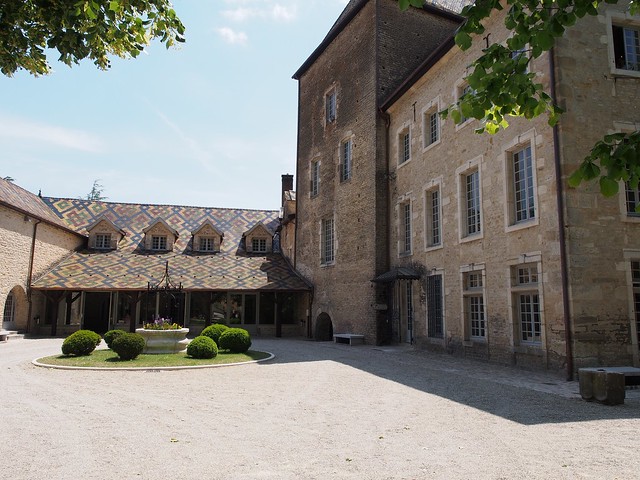 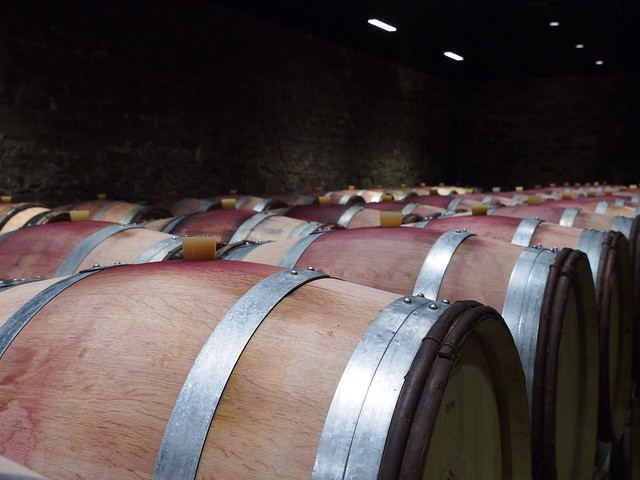 Eva was super-excited to learn that the dungeons at the Château had been converted into wine-aging rooms and is going to be proposing the same change for Pelican Bay. 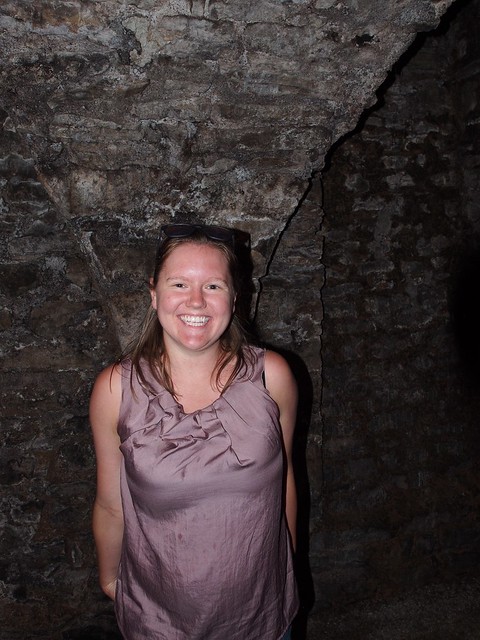 This was supposed to be a big tasting in a tasting room, but there was a mix-up, so we only tasted a couple (okay, five) wines. No great pictures here because, frankly, the tasting room looked like an office park. The wine was good, though. I definitely bought a bottle of Corton Les Maréchaudes Grand Cru after tasting it.

On Tuesday, we took more TER trains from Beaune to Avignon (via Lyon-Part-Dieu). Avignon was cool — there are a bunch of Roman ruins in the area, and the city itself is built around the Palais-des-Papes, which was the Vatican from 1309 to 1377 and is super-cool. Avignon is also the center of Rhône Valley winemaking, and is just south of Châteauneuf-du-Pape, Eva's favorite wine region.

Avignon itself, however, is kind of meh. We stayed at a bed & breakfast called Villa de Margot, which was adorable, but which was surrounded by high spiked walls. The neighborhood we stayed in (in the northeast part of the city) was pretty impoverished and not the most pleasant place to spend time, specially after the beauty and luxury of Beaune.

The main reason we went to Avignon was to drink lots of delicious Châteauneuf-du-Pape wine, and that's what we did on Wednesday. We went on a wine tour with a fellow named François who runs Avignon Wine Tour and is excellent at SEO (we took tour 3). François was a little goofy (I don't know if we really needed a fanfare the first time the castle came over the horizon), but he knows his stuff. He talked a lot about the sources of flavors in wine (e.g., what kinds of soil generate which kinds of eathiness), how to properly taste wine, and the history of Châteauneuf-du-Pape.

Check out the soil in the first vineyard we went to: 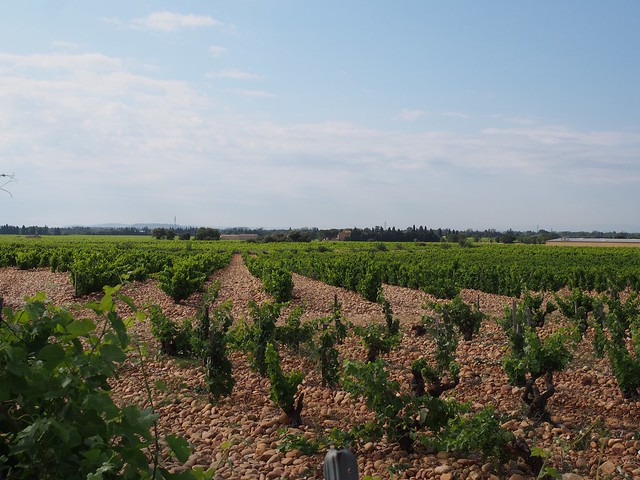 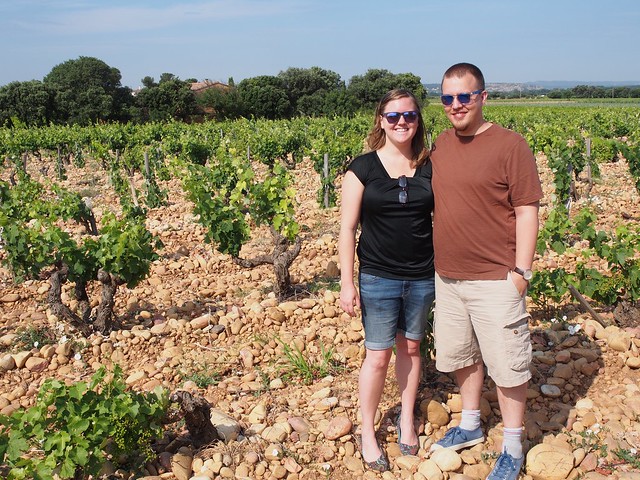 We also had a really good lunch at a restaurant right next to the ruins of the Château itself. Look at the view: 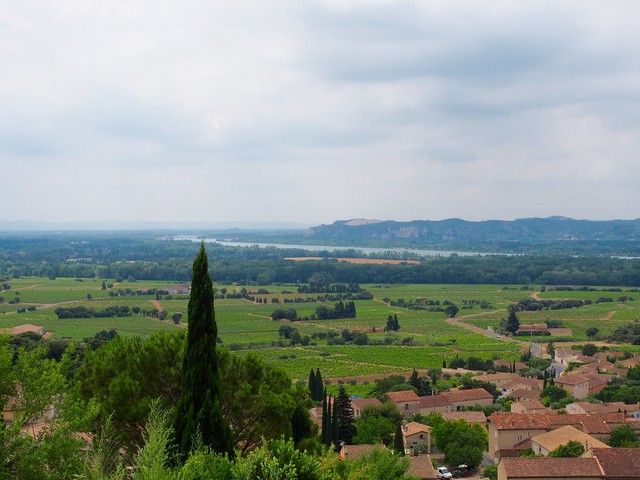 All of the wine was great — and too numerous to list.

I was pretty excited to go to the Palais-des-Papes (I guess my father managed to instill some interest in history and architecture after all), so we did that tour on Thursday before leaving Avignon. It was extremely impressive — a well-preserved structure whose construction began in the 13th Century. 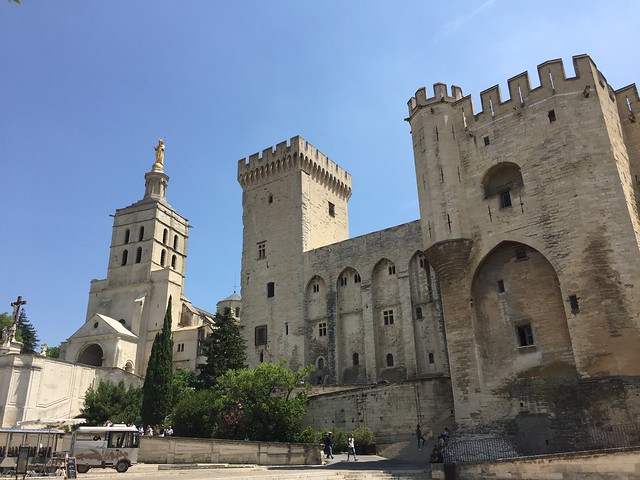 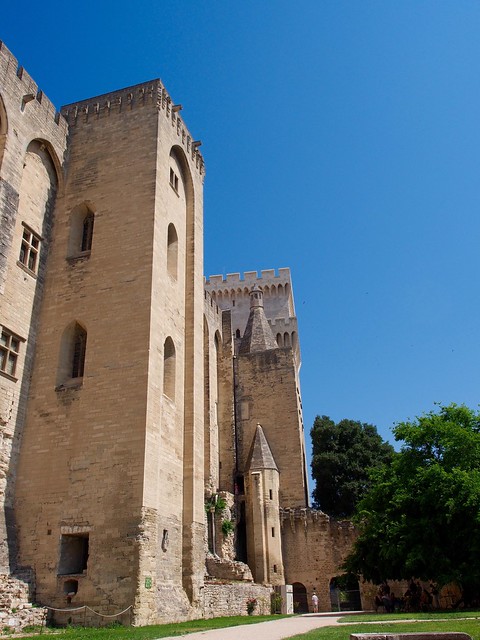 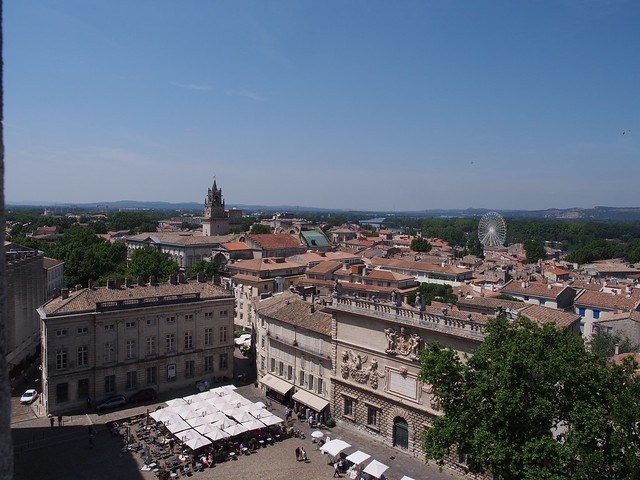 On Thursday, we departed Avignon for Saint-Raphaël, a beautiful town in the French Riviera on the Mediterranean coast. As usual, we took TER. We stayed at La Villa Mauresque, about half-way to Boulouris, and we spent nearly all of our time either in our luxurious room, in the private terrace attached to our room, in one of the two pools (or three jacuzzis), or at the beach.

No tours or wine adventures here, but the restaurant at the hotel was really good. Discovery: John Dory is delicious.

On Monday morning (June 15th, if you're keeping score), we departed from NCE for San Francisco, via Heathrow's extremely strange/industrial Terminal 5: 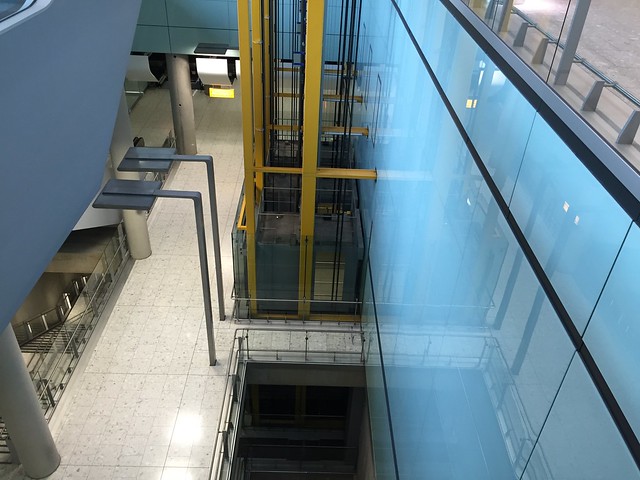 It was the first time I'd been on a 747 for almost a decade (and this time it was a real BA flight; none of that AA nonsense), but it was still a godawful-long flight. 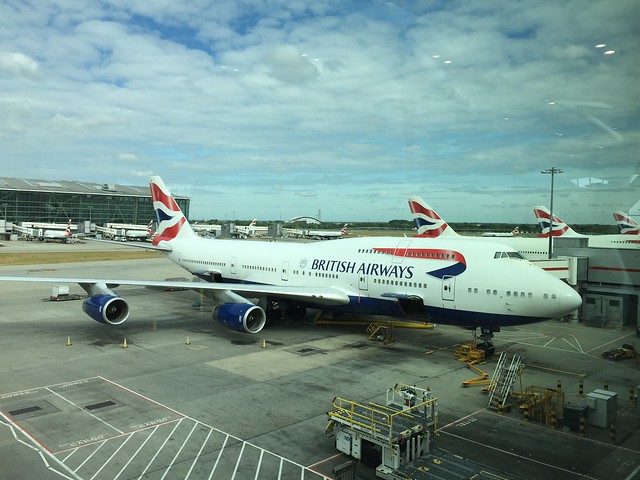 We've been home for a couple of weeks, and I think we're starting to settle back into our normal routines. It was a great trip, though, and I can't wait for our next awesome vacation.