Hello intermittent readers, and welcome to the latest edition in my series on electoral advertising. As you may or may not know, June 5th is California's primary election for 2018. We've got a contentious list of ballot measures, as well as a variety of local, state, and federal offices up for election, which means it's time for a bunch of special interest groups to spend money sending my family high-gloss advertising pamphlets.

On the ballot this time around:

After the fold, let's see who's spending their advertising budget in densest San Francisco.

As you may or may not know, today is the day before the most contentious election in recent memory. Aside from the presidential race between a competent woman and a can of orange spray paint, there are also a host of down-ballot candidates at the federal, state, and local levels, and, here in San Francisco, an outstanding 42 state, regional, and city ballot propositions. As is usual, I've received a healthy pile of 77 pieces of election spam this season; here's my tally.

Overall, of the 77 pieces of mail that my wife and I received in the months leading up to this election, 15 of them were voting slates and 62 of them were either single-issue or, in many cases, dual-issue (U & P, Q & R). As far as I can tell, only a single one of them (the state-issued party-level official endorsements) even touched on the presidential campaign. Read on for details!

Hello readers! If you've been living under a rock (or, really, anywhere that isn't California), this coming Tuesday (June 7th) is the most important primary election in California in recent memory! As befits such a momentous occasion, I've received another batch of election spam!1

Surprisingly, the biggest issue in this election in San Francisco isn't the presidential primary, but is instead the election of the Democratic County Central Committee (the DCCC); the vast majority of election spam that I received was either a complete slate for the DCCC, or an ad for an individual candidate.

A couple of weeks ago, I posted about the election spam that I'd gotten. I figured that since voting had begun, the flow of ads would taper off. Boy was I wrong! Here's my current count:

In addition to all of this paper spam, I now get between one and four phone calls a day from supporters of various candidates (and, in one case, from a candidate themselves). And three times now, I've caught campaigners tailgating into my apartment building to annoy people door-to-door.

Most of these have sent three or four different ads with the same slate but different artwork or highlighting different issues.

At least there are only two more days. 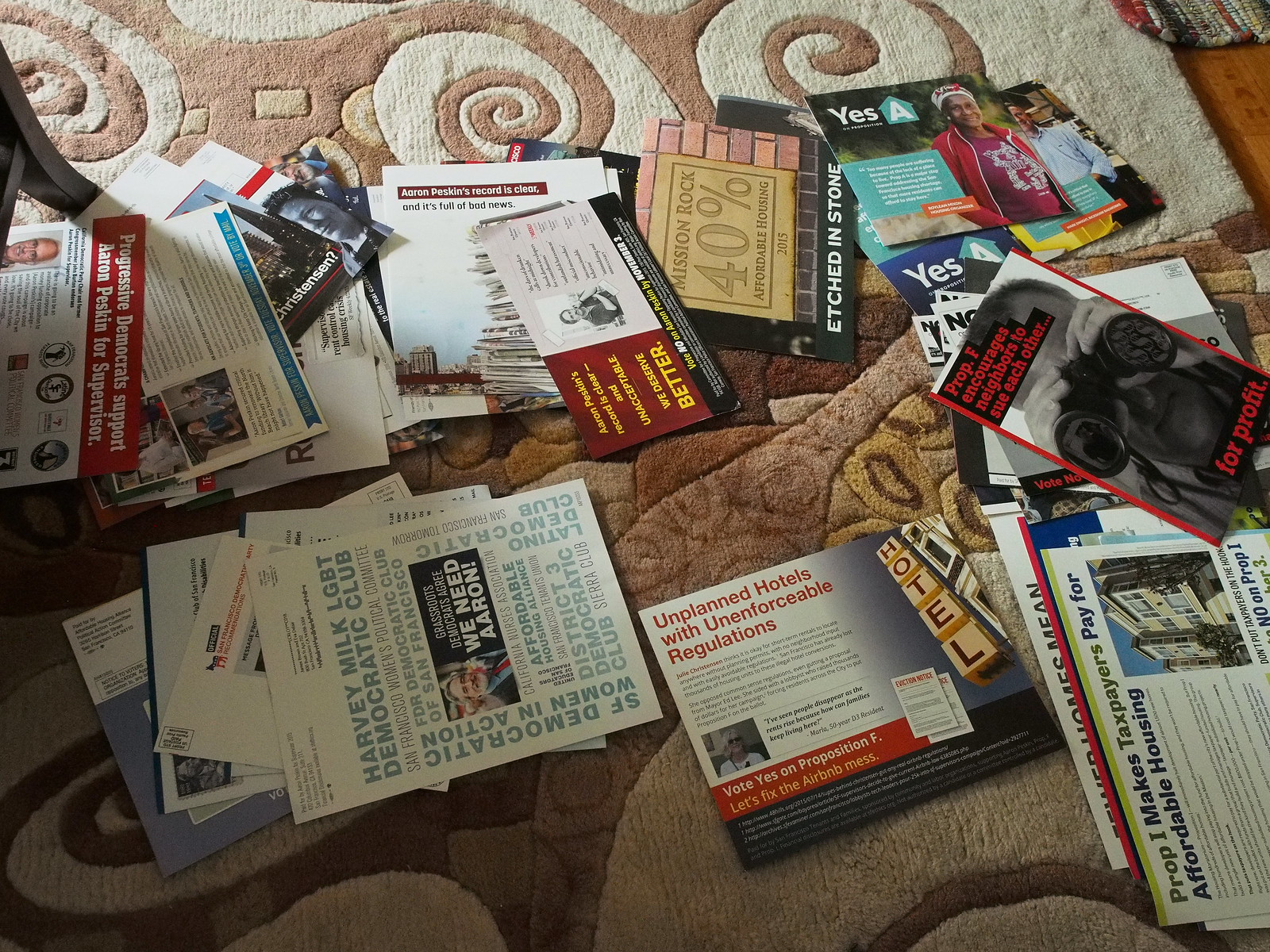